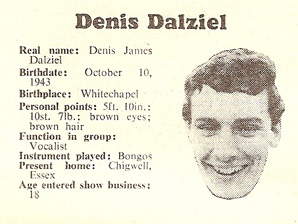 Denis D'Ell was born 'Dennis James Dalziel', in Stepney, East London, on the 14th October 1943. (Source: His daughter via email) He trained as a signalman for British Railways, where workmates who heard him sing encouraged him to enter a talent contest which he won. According to an item in the NME he was also a plumber before joining the Honeycombs.

Music must have been in his blood though since not only did he remain in the music business through thick and thin until his untimely death in 2005, but also his brother Laurie still plays bass to this day in various bands, including Medicine Hat.

A number of articles imply that the talent contest led directly to Denis joining the Honeycombs, however it was a chance conversation between Martin and a mutual friend which led to them hooking up.
Then a local semi-pro band called The Sheratons, led by Martin Murray, Denis joined, aged just 20 and very shortly afterwards the band auditioned with Joe Meek, agreed a management deal with new songwriters Howard and Blaikley, signed to Pye records, and changed their name to The Honeycombs.
Before he was 21 he had appeared on 'Top Of The Pops', 'Thank Your Lucky Stars', and 'Ready Steady Go', with the band's worldwide number 1 smash hit, Have I The Right. Further TV appearances followed during 1965 as well as worldwide touring with The Honeycombs.

Cutting from NME (cropped) 28th August 1964. Note date of birth given as 10th October, however I have an email from his daughter stating that it was on the 14th

What is not so well known is that Denis did not particularly like the music that made him famous. He was critical of Joe Meek's recording techniques. He said "There was always contention between us and Joe that he never recorded the band the way we sounded. He was fond of speeding us up so that I ended up sounding like Mickey Mouse. He liked to compress everything and put on so much echo ─ we ended up like the Tornados with a singer."

In an August 1964 NME article, he gives his favourite singers as Elvis, Roy Orbison, and Brook Benton and favourite artists/instrumetalists as Ray Coniff, Floyd Cramer, Chet Atkins, and Bill Black.

In the summer of 1964 Denis saw a band called 'Dave Dee and the Bostons' and liked them. He got them a slot supporting The Honeycombs more info (30th September 1964) and showed them to managers Howard and Blaikley who took the band on, changing the name to 'Dave Dee, Dozy, Beaky, Mick, and Titch'. The deal between The Honeycombs and Howard and Blaikley required that the Honeycombs got first refusal of all new songs written by the pair. If they turned a song down then it would go to Dave Dee.
After Martin Murray left The Honeycombs the mantle of band leader naturally fell to D'Ell. Since Denis preferred blues to pop he turned down a lot of songs. In fact The Honeycombs second album only has three Howard and Blaikley numbers on it compared to the first which only had three songs NOT penned by the pair.
Naturally those songs were offered to Dave Dee. So songs like 'All I Want', 'No Time', 'You Make It Move', 1965; and (among many others) 'Bend It' 1966 might have been Honeycombs songs.

In April 1966 The Honeycombs broke up although Honey and John Lantree continued with a new line up calling themselves The New Honeycombs, but having little success.
Denis then pursued a solo career and in March 1967 released It Breaks My Heart In Two / Better Use Your Head CBS 202605, the B side later became a Northern Soul classic although very few copies were sold.

Wikipedia states that Denis formed a band with Rod Butler called Zarabanda and although there are several mentions of this band on the internet, they all say exactly the same thing and none of them give any source or further details. I have, however, been lucky enough to interview Rod Butler, who tells me that Zarabanda was in the early seventies, and evolved out of a band called "Bang" that he started. Amazon has an MP3 album with a release date of 2007 but the 'sleeve art' says "featuring Denny D'Ell". Zarabanda - Living On The Line album on Amazon 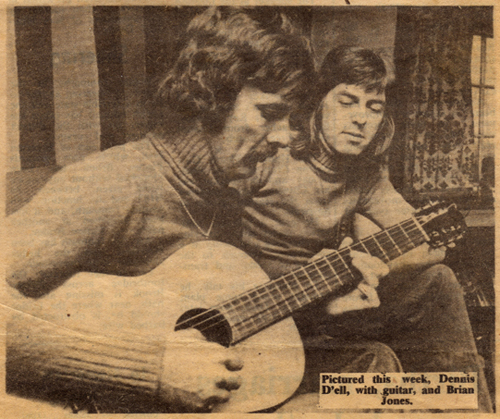 Denis fronted the Don Harvey band during the early seventies. I have seen this on several websites, again with no references or further details. However thanks to personal recollections from Brian Jones (a friend of Denis) who knew him from 1972 until his death, I hope to have more details shortly. They played a residency at the Royal Standard in Walthamstow at that time. Brian also managed Denis from 1974 - 1976 and he appeared on New Faces transmitted 8th February 1975.

On the same show was a comedian called Kenny Windsor, real name Kenneth Elcocks, from Shropshire. Currently his son Lee Elcocks is searching for any recordings still in existence of this particular show. Although this article suggests he has been successful he has not. If anybody has an old VHS recording of this or even audio of the whole show please get in touch either with me or with Lee at l_elcocks @ hotmail.co.uk 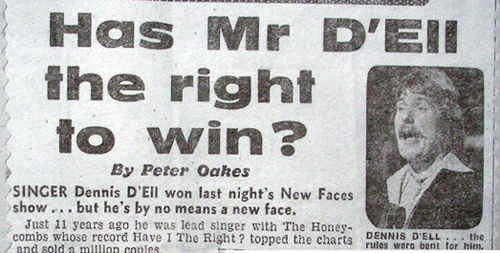 Cropped cutting from the Sunday people. Click the image for the rest of the article.
With thanks to Lee Elcocks for the image.
Denis won the show that week, but there was a bit of a public outcry because some people felt that he was not a NEW face, having fronted a number one chart band. Others, including his manager, argued that as a solo performer he was a new face especially since he and the band had been out of the limelight for some time. Kenny Windsor's act had been altered at the last minute on the insistence of the producer and this may have made a difference to the outcome.

An audio recording exists of Denis' performance which I have just obtained a copy of. It is very poor audio with lots of clicks and pops but it gives an idea.

This is the introduction from that show in which the announcer mentions how The Honeycombs knocked The Beatles off the number one spot and then he goes on to misprononuce Denis' surname. 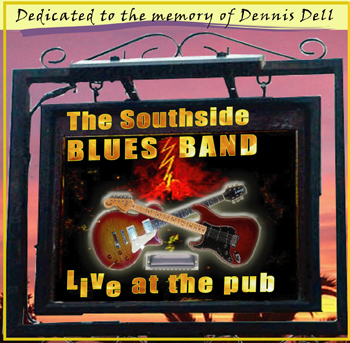 In the 1980s he was with The Southside Blues Band according to dozens of websites each copying from the others. He was joined by his brothers, Laurie "Lol" Dalziel on bass, and Ian Dalziel on drums, and Clive Welch on guitar.
I have also been told by Denis' daughter that the line up was Lol Dalziel on bass, Tommy Dunn on lead and Clive Brooks on drums. For the time being I am going to assume that there was more than one line up of the band.
A guitarist and associate of Denis' named Christopher Frost recorded the band and produced a CD for friends and fans entitled "Live At The Pub"

In 1983 Denis appeared in an episode of The Time Of Your Life according to IMDB. This of course focused on the year 1964. It is not clear whether this was a live appearance or a piece of film from 1964.

In 1994 the MKII version of The Honeycombs reformed for a 30th anniversary gig, and around that time they recorded a cover of "Live And Let Die" for a compilation album Cult Themes from the 70s Volume 2 on Future Legend Records.

During the nineties and into the new millennium he was with a duo called "The Shuffle Brothers" with Tommy Dunn (who also played with blues band National Gold) and sometimes Andy Robinson Andy Robinson Band who would depp for Tommy. They played regularly at The Minerva in Southend-On-Sea (now a restaurant) as well as other venues.

Andy said "Working with Den was a real pleasure and great learning curve. We used to play a pub in Southend on Sea called the "Minerva" on a Sunday, playing sometimes from midday to midnight and I don't ever think he repeated a song once. His knowledge was enormous as was his talent and sound.
The last time I saw him was at a fundraising gig in Saffron Walden football club, his appearance was heartbreaking , he died soon after."

Denis died of cancer on 6th July 2005 and the world lost a greatly under-rated singer.