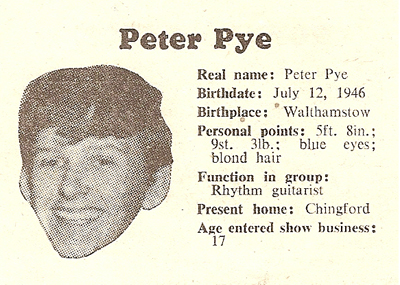 He grew up in the same area as Martin Murray and other Honeycombs band members. His father worked for Martin's father as a sign-writer. Peter was another of Martin's guitar students, and he played guitar in "The Bumblies" and then "The Skylarks" with Rod butler who later joined "The Honeycombs" as well as being in bands with Martin Murray.

Then in early October 1964 Martin Murray was pulled off stage by over-enthusiastic fans and sustained a broken leg and hand. Peter was a natural replacement for the next few weeks of gigs while Martin recovered although Martin still managed to fulfill their TV commitments. His first gig was on Wednesday 7th October 1964.

However when Martin left at the end of 1964 Peter stepped in (much to Martin's annoyance) unable to resist the lure of joining a successful band as a full time member.
Alas the band had, unbeknown to any of them at the time, already had their biggest UK success, but Peter was at least rewarded with tours of Japan, Australia, Sweden and many others.

Following the chance discovery of this ebay listing Honeycombs Peter Pye, recording as Peter Franc. I contacted the seller who turned out to be none other than Paul Moy, who has been researching The Honeycombs for considerably longer than I have. He has confirmed that this is correct and adds, "There is a brief mention about him on page 95 of Record Collector September 1995 (where the name is spelled Frank), and also page 13 of Thunderbolt: The Joe Meek Appreciation Society Magazine No. 41 (again, as Frank). The 45cat listing gives four singles as follows.